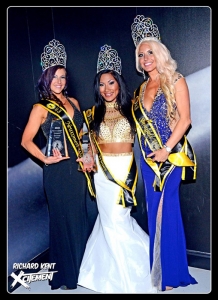 June 2, Clearwater, FL: With its status secured as the most prestigious and selective feature dance contest in the U.S., ED Publications is excited to announce the winners of the EXOTIC DANCER Invitational (EDI) East. Once again, the industry’s top feature entertainers, including the hottest newcomers and more established and successful “showgirl” features, competed for top honors, including an automatic nomination for the prestigious ED’s Overall Entertainer of the Year Award and a chance to perform on stage at the Annual ED’s Awards Show during the 2015 Gentlemen’s Club EXPO in New Orleans.

Held at the impressively remodeled Fantasies Nightclub in Baltimore, Maryland, the EDI East boasted three nights of competition in the Newcomer (May 28), Showgirl (May 29) and Champion (May 30) Divisions, with each night being a “final” in its own right. Natasha Nova outlasted the competition in the Newcomer Division with her alluring “Wonder Woman” routine, while “the force” was clearly with Lisa Licious during her Showgirl-Division-winning—and very entertaining—“Star Wars” set. In an extremely tightly contested Champion Division, Justice, Lacey Rain and Christina Aguchi each showcased exactly why they belonged in this elite division. But only one could win, and it was Christina Aguchi and her famed “Michael Jackson” routine that wowed the judges and helped her capture the EDI East Champion Division title.

“It’s always exciting to get so many great feature entertainers in one place for this national dance competition!” says EDI Producer and ED Publications’ Associate Publisher, Dave Manack. “It’s also a bonding and networking event for the entertainers, as they get the chance to spend three days viewing each other’s shows, getting to know one another and rooting each other on throughout the three-day event.”

The EDI East contest was once again coordinated and co-produced by Lexi Lamour and hosted by renown industry emcee Tony Batman. Both EDI competitions (East and West) were sponsored by Safari Sun/GentClubShirts.com and PlanetPlatypus.com.

Feature entertainers interested in competing in the 2016 EDI contests, or clubs interested in hosting the 2016 EDIs, are encouraged to contact EDI Producer and ED Publications’ Associate Publisher Dave Manack at dave@edpublications, or by calling (727) 726-3592. Much more information, including extensive coverage of previous EDI contests, titles that are offered, etc., can be found on www.theEDIs.com.